Santosh Goli started his career as SQL DBA/Developer at ADP Pvt Ltd. He joined Microsoft in Dec 2007 as a SQL Server Support Engineer and became a Software Developer. Currently Santosh works on designing/developing the enterprise data warehouse and analytical solutions for Microsoft Business which report revenues up to 6 billion USD annually. He worked in different roles in his career at Microsoft. He started off as a SQL Server support engineer working with enterprise customers and quickly became performance SME. He worked as On-Site PFE for ICICI Bank and moved onto a Developer role where he has been designing/developing enterprise scale data warehouses and analytical platform for Microsoft. Performance tuning is his other area of interest in addition to technology stack. Santosh holds a Master’s degree in Computer Applications from Osmania University, Hyderabad.
Outside of work, Santosh loves to spend my time with my family and going on long drives.

Santosh brings a great deal of passion and energy to share his knowledge with the community. We at DataPlatformGeeks thank him for his unconditional support to our community efforts. 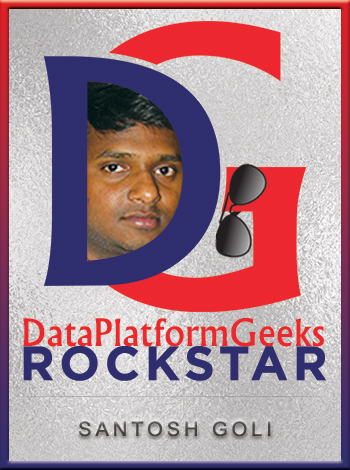