Rainer Stropek is co-founder and CEO of the company software architects and has been serving this role since 2008. At software architects Rainer and his team are developing the award-winning SaaS time tracking solution “time cockpit”. Previously, Rainer founded and led two IT consulting firms that worked in the area of developing software solution based on the Microsoft technology stack. Rainer is recognized as an expert concerning .NET development, software architecture and databases. He has written numerous books and articles on C#, database development, Microsoft Azure, XAML, and web development. Additionally he regularly speaks at conferences, workshops and trainings in Europe and the US. In 2010 Rainer has become one of the first MVPs for the Microsoft Windows Azure platform. In 2015, Rainer also became a Microsoft Regional Director. 2016, Rainer also got the MVP award for Visual Studio and Developer Technologies. Rainer graduated the Higher Technical School Leonding (AT) for MIS with honors and holds a BSc (Hons) Computer Studies of the University of Derby (UK).

Rainer brings a great deal of passion and energy to share his knowledge with the community. We at DataPlatformGeeks thank him for his unconditional support to our community efforts. 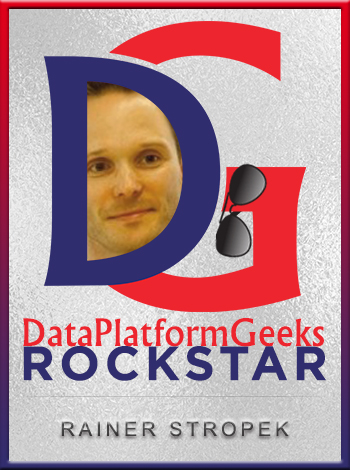